On May 15th the following proclamation was adopted by the Carrboro Village Council and presented to NAMI Orange County by Mayor Lydia Lavelle. 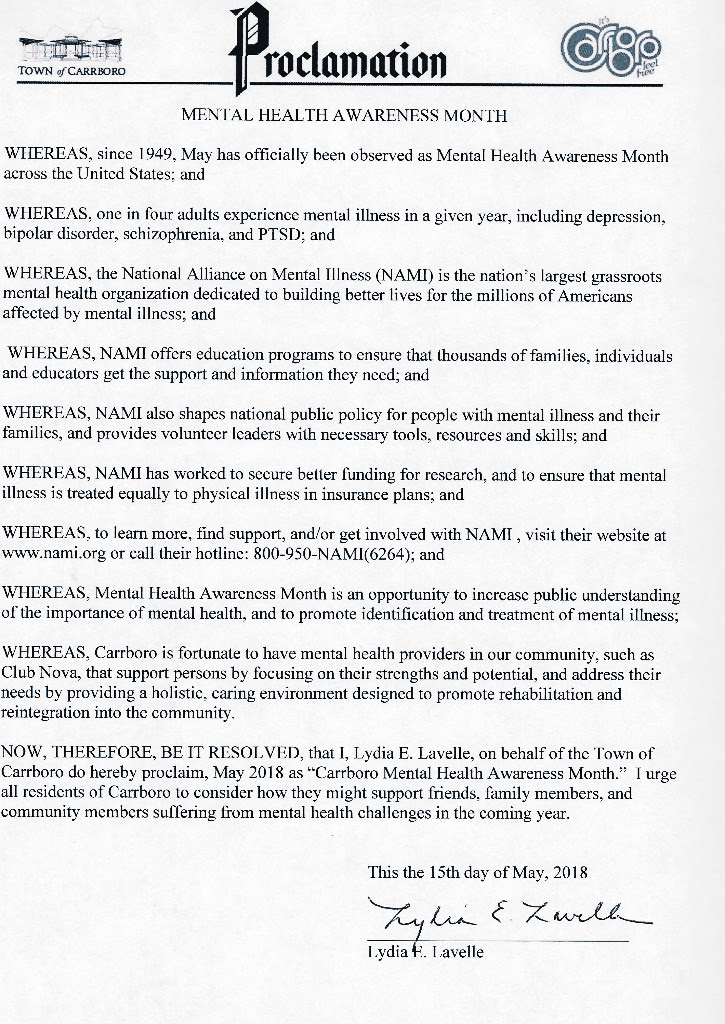 Barbara Maier accepted the proclamation at the meeting:

“On behalf of NAMI Orange County, President Joanna Bowen and our members, thank you for this important proclamation. Joanna is on a well-earned, badly needed vacation. Non-profit presidents work hard, harder than many for-profit presidents!

“Mental illnesses are no-fault illnesses. Chemical, genetic, caused by diverse array of yet to be understood factors, we are fortunate to live in a community of researchers who work to find causes and cures.

“Tragically, our country still suffers from lack of understanding and access to good treatment; stigma; and our criminal treatment of the mentally ill. Alisa Toth, in her book “INSANE: America’s Criminal Treatment of Mental Illness” investigates police departments, courts, jails, and emergency health-care facilities to uncover hidden forces behind it. In America, having a mental illness has become a crime. One in four fatal police shootings involves a person with mental illness. Our three largest mental health care providers are not hospitals, but jails. As many as half the people in U.S. jails and prisons have a psychiatric disorder.

“We are making gains but have a long way to go. Mental Health Courts, CIT trainings, Raise the Age; Criminal Justice Resource Centers, NAMI and other non-profits and agencies are helping to de-criminalize the mentally ill. “Raise the Age” has moved 16 and 17 year-olds out of adult prisons by showing research that young minds are still forming but subject to immature judgement and high risk behaviors. Rather than prosecuting juveniles, helping them is the better answer. Screening and early diagnosis is becoming more accepted. Co-ordinated treatment for persons with both addiction and mental illnesses works; getting that treatment is profoundly problematic.

“Thank you, Mayor and council members, for your heartfelt expression of Carrboro’s concern and commitment to improving services. You are home to one of the finest examples of good care. “Club Nova” adheres to a club house model that treats members with dignity and respect. It is among the best nationwide. NAMI Orange County’s members, primarily composed of persons with an illness and family members, and all volunteer, are proud to witness this proclamation. It is your promise, a promise that gives us hope.”

Thank you to Rose Hoban and NC Health News. Orange County (and Durham) lack local papers, good to know Rose, Taylor, and others are looking out for us. ... See MoreSee Less

If you use your difficulties to create art, says Ruth Ozeki, it will give them meaning.
View on Facebook
·Share

NAMI Orange County is proud to be a sponsor of the Legislative Breakfast on Mental Health for over a decade! ... See MoreSee Less

NAMIWalks took place on 5/18/19, however it’s not too late to donate to the “NAMI Orange Stigmabusters” walk team.  Your donation will support the NAMI mission to Advocate, Educate and Support individuals living with serious mental illness and their loved ones.